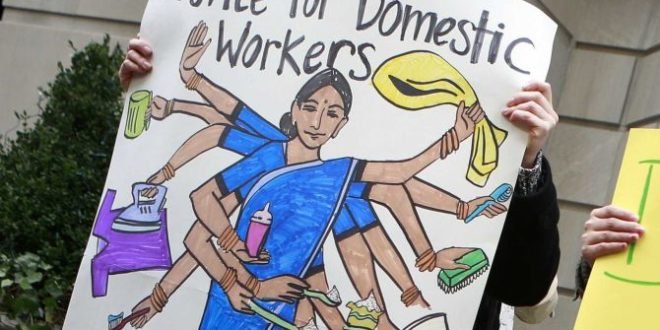 Corona Crisis: When Will Women Working At Home Return To Their Work?

The country is coming out of lockdown, but the doors of the housing society are still closed for sweeping and washing the meds. Due to this, the crisis of livelihood is increasing in front of thousands of women working in the homes of others.

Many housing societies have placed a condition that if they want to return to work, then show Kovid-19 negative certificate. Many unions of domestic workers are now making similar demands to people holding meds.

Workers’ organizations believe such a view that only the poor can spread the corona virus.

National Convenor of National Domestic Workers Organization, Christy Mary, says that some society is being asked to bring test reports. Even then, we will allow work only when meds stay with them in their home. Are not allowing movement.

Organizations say that Corona can be a career. Made ready for safety measures such as thermal screening, frequent hand washing, keeping distance. But the responsibility should be on both the parties and not just on the med.

40-year-old Anandi worked in a society in Andheri, Mumbai. When unlocked on June 8, he hoped that maybe he too would be called to work.

When she went to talk, the watchman stopped outside. Anandi spoke to the society’s secretary over the phone. Secretary said clearly that “If you have corona due to me, we will not take responsibility for this.” The meaning of his saying was clear, that if anything happens, the responsibility of this will come to Anandi’s head.

The house in which Anandi works, he also wants her to return to work. But Anandi has been told that he will have to submit his photo and ID with the society. Now Anandi is confused what to do.

Anandi is the only earner at home. It is said that there are two children, the husband does not give anything. She is a mother-in-law over 65 years old, she used to work. But now he is not being called due to age.

According to official figures, the number of helpers working in India’s homes is more than 40 lakhs. Unofficially, this number is said to be around five crores. Two-thirds of the people working in homes are women.

Household meds and the families who work for these people are dependent on each other. It is a means of livelihood for the economically weak, while the middle class spends a little money and runs a family with comfort and convenience.

Some people also want their meds to return to work. Anoop, who lives in Navniti apartment in East Delhi, had even called his med Arshi to work a few days ago. For this, the society management had asked Anoop in writing that Arshi would come with a mask, she would not sit anywhere, Vagahara-Vagahara. But after passing the proposal only after eight days, the arrival of meds in the society was banned again.

Share
Previous Special hearing on Sunday in Supreme Court on Vinod Dua’s petition
Next Such Maya of Corona, mothers had to change their children