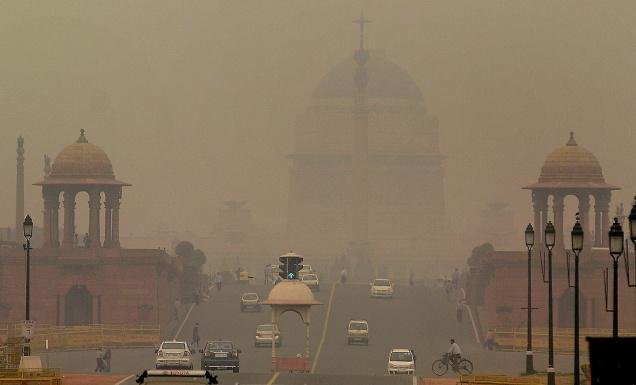 In the winter season on Tuesday in the capital appeared completely covered in fog sheet. Late Sunday night, the fog has started to show its effects. On Tuesday morning, including Delhi and NCR is capped by the thick fog. There is 10 meters visibility only. The bearing rail, road and air traffic is having an impact on. According to weather expert BP Yadav same meteorological weather patterns will continue until Thursday. Meanwhile, the temperature will not fall over. The maximum temperature between 22-23 degrees Celsius and the minimum temperature is estimated to be 9 to 10.
On Monday, the maximum temperature of the capital was 24.4 (two degrees above normal) and a minimum temperature was 8 ° C (normal) were recorded. A few hours after sunrise when the fog was so little thought to the impact of the outbreak of the winter will decrease. But the fog proved inefficient due to the heat of the sun. Day temperatures two degrees above normal despite the bad effects of cold appeared.

The fog will remain for the next three days. But much temperature fluctuation will not be seen. The fog in the morning mocks school children waiting for school vehicles appeared on the streets shivering. People who visit the office in the morning did not arrive in time. Sunset, the fog began to show its effect again.

Aircrafts were also halted by the first fog of the season. Tuesday morning due to dense fog the level of visibility on the runway of IGI Airport was less than 50 meters. As a result, many early morning flight operations is stalled. Meanwhile, some international and domestic flights were cancelled, while some international flights and flights to Jaipur, Ahmedabad and Lucknow been diverted. Affected flights inconvenience suffered by passengers at the airport.

Fog Deteriorated Trains
The trains which have slowed from the outbreak of fog. Whose impact is being witnessed at the railway stations where platforms, ranging inquiry counter the upset passengers are rushing to the waiting room. Most trains are running late. The arrival and departure of many trains are four to five hours late which makes the passenger crammed. New Delhi or Old Delhi or any other railway station all are in the same condition. Important trains like Rajdhani and Shatabdi are also running late so as local trains.