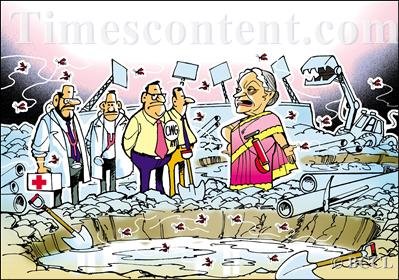 My heartbeat is racing and I am nervous: Sheila Dikshit

Delhi Sheila Dikshit ruling by beating three consecutive elections this time is increased. Arvind kejriwal party of the common man are not taking lightly. Sheila says Kejriwal in Delhi elections can not rule completely. He said that the public are not in a position to say something about the mood.

She first spoke to the media about Kejriwal. Earlier, speaking at the Kejriwal have been avoided. She kejriwal two steps forward and take a step back. Vision does not have any work for them. Dikshit was made to the common man party is attracting people’s attention.

Arvind kejriwal when asked about the party of the common man on Sheila Dixit said he does not understand that “AAP” will effect the party or not, but according to Sheila ‘ AAP ‘ is of course drawn to people. the Chief Minister also immediately added, “I don’t think  AAp  tilt the party into votes.”

Sheila said we are quite confident and nervous. election to 8-10 days before the public mood suggests. the Chief Minister says BJP election Congress in Delhi from combat, and you third place. electricity bill issue Sheila said Haryana and Uttar Pradesh electricity prices are too much from Delhi While consumption more than in Delhi, which once had just come to Delhi, he is living and because of Delhi’s prosperous in every way. Gujarat Chief Minister Narendra Modi is in response to the statement attached to the ribbon cutting of he said MODI knows that must work to cut the Ribbon. the effect of Delhi’s incumbency against anti union election on question Sheila Dikshit said that the Center And State election are separate and will not impact on the State of things Center. Sheila Dikshit says every election is different from the last election.