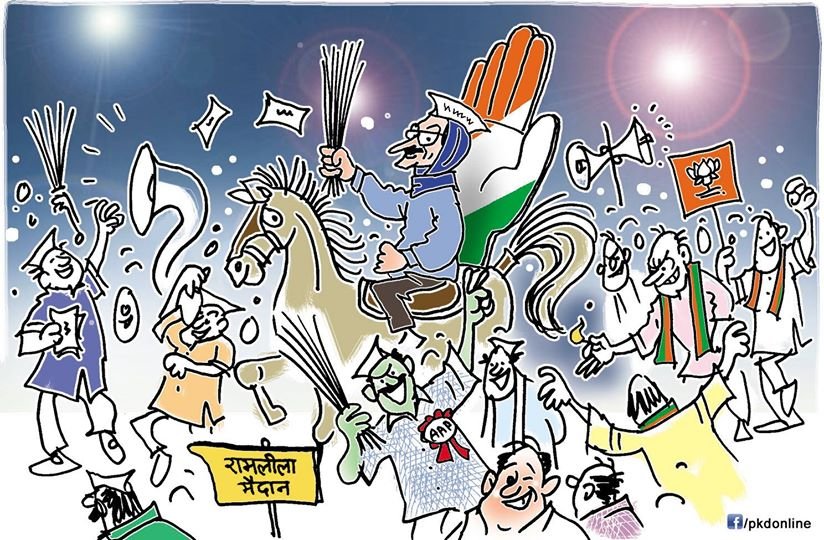 Kejriwal is corrupt and deceitful : Binny

Rebel was adopted by Laxmi Nagar layman party (you) lawmaker Vinod Kumar Chief Minister of Delhi on Thursday morning by Binny Kejriwal on allegations he had submitted to Arvind Kejriwal and traitors he used words like Kejriwal alleging complicity by Sandeep Dixit at too.

Binny said Arvind kejrival’s dictatorial attitude the party have strayed from its purpose. “he said, on the issue of water power-Delhi, faked feeling.” he even said, ‘ Party Arvind kejrival and his childhood friends. Sanjay Singh sisodiya and Manish Arvind Kumar kejrival childhood friends. that party. ‘ Binny said the rebel was to implement”If the Government of Kejriwal, not all their major, so I promised from Delhi’s Jantar Mantar-the indefinite Anshan.

Binny said in the press conference that the common man was the cause of the party, he strayed. He said that the whole Party 4-5 people hostage. decide what off room to the front of the democratic public. drama.
Many issues one at a time by Binny. first of all, he said on the issue of water, we have promised the people that before the election, did not meet him. very smartly tricked the public we have Delhi. we have said that 700 liters of water will be in Delhi, free, butHe later changed it. now has more than 700 litres of water as soon as you will have to pay you bills derived. that work in the case of electricity was first promised that electricity bill will be half it was not a condition for the elections but they are 400 unit with complicity scheme. This benefit just 10 per cent of the people of Delhi. 90 per cent previous feel . ‘ Binny said this issue should answer them

Binny said, ‘ you told before the election by the Government after just 15 days in Delhi, but the Bill will janlokpal Anna on 15 days passed after a discussion the importance of time in politics not. If you will not complete your work on time then the public will not trust you. ‘ Binny saidKejriwal intended that he somehow by the Lok Sabha elections At the time of the power cut, then rubbing at all.

Binny, the rep of being insensitive too. He said that on the issue ofKejriwal the team rep was the streets, he now has become insensitive female security. Binny has this recent example too. “he said, with a foreign woman in Delhi on Tuesday, rep, butKejriwal has not given a statement on this issue.

Binny, Arvind Kejriwal and Congress accused of complicity between. He said the son of Sheila Dikshit and East Delhi MP Sandeep Dixit ArvindKejriwal good friend. He said that theKejriwal are working on Congressional gestures. Binny has questioned that after all corrupt Ministers in Delhi against so far, why not order inquiry ArvindKejriwalWhile the polls were saying before the Government created them as soon as they will be sent to jail.

Kejriwal l on corruption charges he Arvind. He that Arvind has made corruption in distributing tickets to Assembly elections. Binny said all tickets were already fixed, then they ask why applications from workers? He played hard working workers feelings why? He said that my ticket was first settled when I denied, he said you have to fight the same. Binny has maintained elections from Delhi who has also said that it is certain some people are propagating.

In the end they said ArvindKejriwal tyrant. party just he and his childhood friends. He asked whether the same question in Arvind Kejriwal of Swaraj?