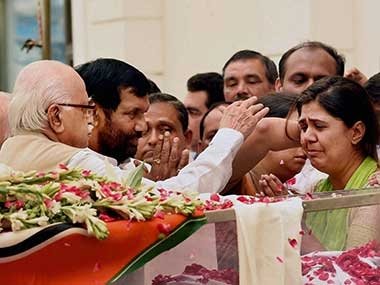 The BJP leader and the Union Minister Gopinath Munde were consigned to flames at his birthplace in Beed district. His daughter Pankaja Munde performed the last rites in his paternal village. His body was kept at Parli for “Antim Darshan” and thousands of supporters came there to see his favorite minister last time and to pay the last respect. Pankaja herself appealed to make peace, to the crowd. There were tears in the eyes of each and every person.

Shiv Sena chief Raj Thacrey, Ramdas Uthavale of RPI and so many other leaders of BJP and Congress reached there to give homage to Gopinath Munde.

Before this, the body of Gopinath Munde was taken to his ancestral village Parli. His body was kept in the BJP Office in Mumbai for “Antim Darshan”.

Munde was the big face of the BJP in Maharashtra. He was made Rural development minister last week.

The tribute has given to late minister Gopinath Munde in the first session of the 16th Lok Sabha. The proceedings of the Lok Sabha are postponed until Thursday.