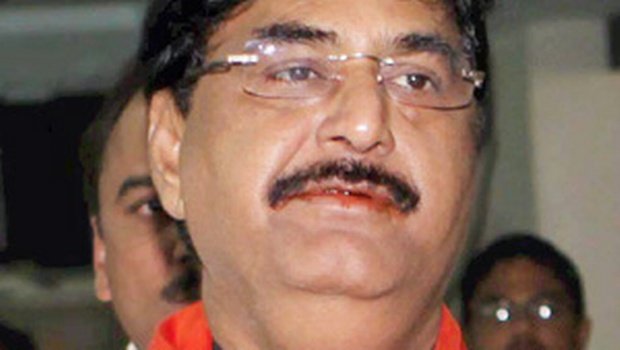 Union Rural Development Minister Gopinath Munde died on Tuesday morning because of the heart attack after a car crash. Munde was admitted to the Trauma center of AIMS after the accident, where doctors declared him dead at 7:20 am. Health Minister Dr. Harsh Vardhan and Nitin Gadkari gave this news. President Paranab Mukherjee and Prime Minister Narendra Modi condole death of Union Minister Gopinath Munde. The flag will be flown at half mast in Delhi, the capitals of all states and Union territories today in the honor of Gopinath Munde.
Narendra Modi tweeted that he is extremely sad and stunned by the demise of his friend and fellow Gopinath Munde. Narendra Modi wrote, “Gopinath Mundeji was a true mass leader. Hailing from backward sections of society, he rose to great heights & tirelessly served people”.
Nitin Gadkari has told the news of the demise of the Munde. He said that the doctors tried to save him. He was declared dead. Gadkari said that Munde had not serious wounds on his body. His condition worsens because of the heart attack. For last respects Gopinath Munde’s body will be kept at the BJP’s headquarters in New Delhi at 12.30pm.
The doctors of AIMS released a medical bulletin and told that the personal assistant of Munde and his driver came to the trauma center of AIMS at 6.30 am.
Police has arrested the driver of the Indica car who hit the car.