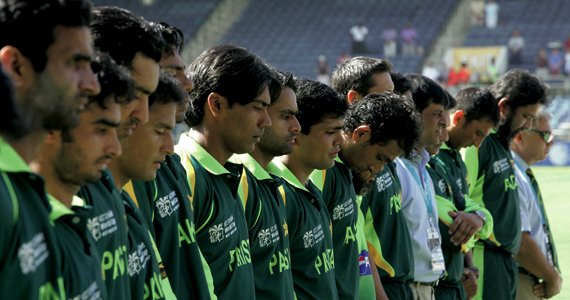 Pakistan T20 team was asked to go from Chandigarh

Pakistan’s domestic cricket team reached India to take part in Champions League T-20 , Pak team faced the odd circumstances. on Saturday, Faisalabad is one of the team’s players Hotel Chandigarh valves come in shortly, telling them to get out of there. culinary team was told that they are not allowed to stay in Chandigarh. Indeed, These players just were visa stay in Mohali, where her first match play on Tuesday.

Faisalabad captained Pakistan test Captain  Wolves misba-ul-Haq are the team on Saturday at Chandigarh hotel. from Mohali PCA Stadium Clubhouse shift. this all happened because his visa was not allowed to stay in Chandigarh and Mohali had just got the visa. usually the teams Pakistan Mohali, Chandigarh is the visa too But only because of the negligence of the Indian arthritis Mohali of visa.

Pakistani players and do not have to face problems, BCCI Secretary and from the Home Office. before Pakistan team not to come to India visa. later after the intervention of Prime Minister was given a visa by citing security reasons Pakistani team. India was allowed to come.

Chandigarh police sources say they have received letters from Union home ministry, in which Pakistani team has talked to tight security. letter also States that Pakistan Team Visa is only for selected cities, they should not be held in Chandigarh till then, as long as it is not allowing the Joint Secretary of Punjab Cricket Association between g. Walia says that Pakistan’s domestic T20 team solved the problem of Faisalabad valves. He informed the Indian Cricket Board on this matter seriously.

About Faisalabad Wolves officials refused to say anything. Sunday team according to fixed shedyatul Mohali Stadium in their first match of the New Zealand practice. otaigo volts. earlier in 2007 Pakistan wagah-Atari border national golf team more than 30 hours had to wait, as did not mention it in their visa they will this way of India.

Previous Boost the beauty by sex
Next The problem is not in the army, it’s in Central Government: MODI