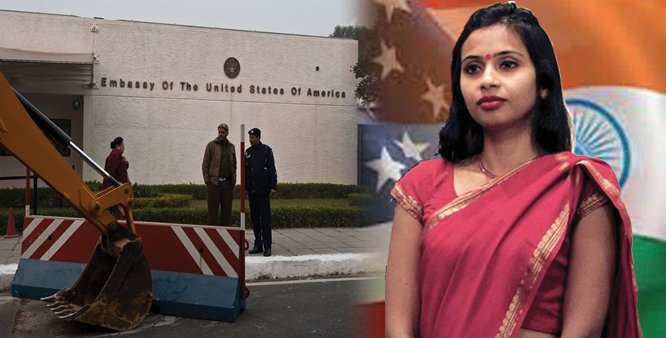 The issue of passionately outrageous arrest of Indian diplomat ‘Devyani Khobragade’, the diplomatic row between India and the U.S. have reached a historic peak.
India is badly hurt and angered by the cold attitude of the United States and an unprecedented move, the U.S. diplomats and their families received their privileges have been cut.

Moreover, U.S. diplomats stationed in India immediately ordered to return the identity cards and airport pass to the authority. The security around the U.S. embassy and police have also been removed.

Although this case will not become so important like the former President APJ Abdul Kalam, former defense minister George Fernandes and Shah Rukh Khan, but the passionate and emotional e-mails written by Devyani to her IFS colleagues make the government to act quick.

She mentioned : I’ve been handcuffed, was stripped searched, cavity were tested, DNA samples were taken, was detained with criminals and addicts. I was surprised seeing all this, I lose my temper many a times and cried several times. And it was then when I have had the privilege of being diplomatic representative.

But I got the strength to face all this humiliation by the thought that I am a representative of my country and my people and I have to represent my nation in a dignified manner.

This is to bring in notice that Devyani was accused for giving the false information for the visa of her maid. Maid in charge stated that they had no fixed salary commensurate funding, which is considered a crime in America.

Devyani was arrested at 9am in the morning when she was going to drop her children to the school.