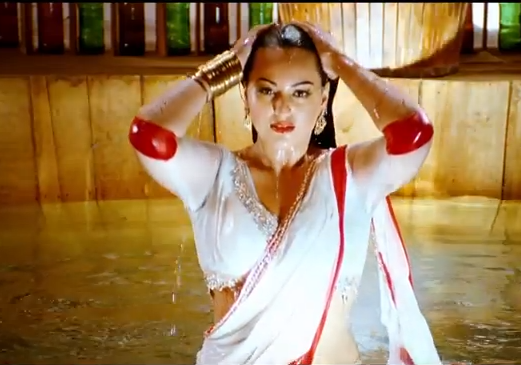 Raajkumar Romeo  entry in the story ( Shahid Kapoor), winning the confidence of the Minister is of his gang .

The donation  ( Sonakshi Sinha ) seems to be in love with . Chanda , Parmar ‘s niece .

Both Raj Parmar and hostility when love seems to forget the hots for each other, become friends and my niece’s hand Parmar , Minister takes the decision to hand in hand .

Rajkumar  and Shivraj each other face to face exposed and become enemies. What happens next, is the story of the film.

Prabhu Deva ‘s a story very old and worn – is cut and dried . Boy – girl’s love , the love between them come villain , a story that we have had for years .

Prabhudeva , Sunil Agarwal and Ravi S. Sundaram, who wrote the screenplay , even a dull and stale . The story has been making a mockery of the arguments . As such , where the prince’s death – the fight of the funds come without any reason , just seems illogical.

Shahid Kapoor as well as romantic hero image and the artist’s vigorous action to a 20-30 goons beating does not embrace.

The author, how to tell the prince did not Jhhmt is so powerful.

Interval before putting the audience in the movie comic scene tried to smile, but it is certainly not succeed, try something special.

There are many stunts and action scenes in the film after interval. The film seems to be drawn. Single screen film to attract audiences have instilled many unnecessary spices.

Dialogue is fine but there are not any much more effective.

“Be Silent .. Or will I be violently” and “Love Love Love or Kill Kill ‘dialogue in the film that are repeated so often it’s impact not just leave.

Sonakshi Sinha
Sonakshi Sinha fittingly starred in the film, but his choice of clothing is useless.
Shahid Kapoor has done to fulfill his role, but his personality does not fit the role at all. Yes, he is the finest dance.

Sonakshi Sinha has worked fine, but the film Dressage them are useless.

Ashish Vidyarthi are fine, but not in comic scenes have been frozen. Sonu Sood is the best act. Prabhu Deva has made its mark in a song.

Directed by Prabhu Deva is simple. Pritam’s music is good. Dirty talk and amusing songs such as sari fall.

Overall ‘R. Rajkumar’ single screen may appeal to the audience but there is nothing in the film to the multiplex audience.