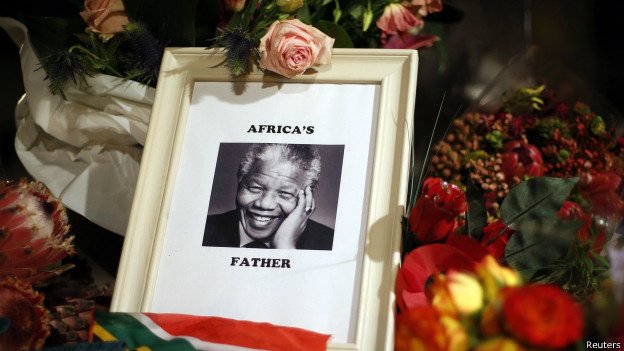 South Africa President Jacob Zuma has announced that December 15 will be cremated with state honors.

He located in the outskirts of Johannesburg , a 95,000 -capacity stadium of national mourning will be provided .

Nelson Mandela later Darshana ‘s body will be kept for three days in the capital Pretoria and Kunu then be taken to his village , where he will be cremated .

On the streets of Soweto in Johannesburg and out of their house is full of people . Offered flowers in his honor by the discharge of some other songs of the era of apartheid.

Worldwide tributes being given to them . U.S. President Obama said he can not imagine his life without Mandela .

Africa African government buildings and embassies worldwide are being put into mourning manuals .

President Jacob Zuma of South Africa from the late night TV broadcast Mandela announced the death of a national flag after having weighed half .

Who spent 27 years in prison, Nelson Mandela against apartheid in 1994, South Africa became the first black president . Mandela became the world’s most respected politician with time .

Archbishop Desmond Tutu said long-time ally , ” God has smiled on us South Africans who our president Nelson Mandela he made ​​a very important historical moment . ”

A program in Cape Town , he said , ” Mandela taught to come up with a divided country . ”

Mandela suffered from long-term lung disease . After being discharged from the hospital in September last home was being treated .

Vilakajhi their old house in Soweto Street , where Mandela was from 1940 to 50 , the news of the death of Mandela come out only at night, people began to gather . Morning – when the numbers began to grow .

A woman mourns doing Mokoena said Terry , ” his life and what he did for us what we are celebrating . ”

Located in the Johannesburg suburb of Houghton has crowded out of their current residence .

Worldwide leader , Celebrities and ordinary people are paying them tribute .

Government of India Mandela is mourning the death of five days . Prime Minister Manmohan Singh expressed grief over his death .

Buckingham Palace said in a statement , ” He worked tirelessly for the good of his country and his legacy in Africa today is a cool looking can tell.”

U.S. President Barack Obama said , “He who can not be expected to achieve any of his men . Today , she ‘s gone home . ”

South Africa as well as in Washington DC and Paris are the flags half-mast . FIFA World Football Federation has also issued orders to tilt your flag .

In Pretoria on Mandela ‘s life and legacy in a special joint session of the Parliament could be called . Johanne

According to BBC correspondent Vuldrij Sberg a state funeral in South Africa would never have happened . World Leaders , Celebrities and fans will get it .

Particularly in remote areas Kunu when so many people to be the biggest challenge will be arranged .