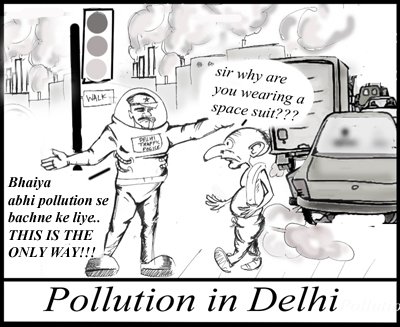 Necessary efforts need to be taken to prevent national capital Delhi being a carbon centre. However, in the last 16 years, 20.2 per cent of Delhi’s green area has increased from 1.75 but the increasing number of vehicles, especially older vehicles are making the condition worsen to deal with the problem of pollution. If concrete steps are not taken, very soon serious consequences will be revealed.

Delhi is being counted as the most polluted city in Asia due to the much increased pollution. According to a study in Centre for Science and Environment [CSE] in the last 12 years Delhi’s air PM [paarticulate matter] has increased to 47 per cent, which is very dangerous for health.

Dangerous levels of PM 10 in Delhi
A study of U.S. Yale University recently found that in comparison to the much financially stronger countries than India, air pollution is worse in our country. Between 2000 and 2011 in Delhi, Paarticular matter [PM] has increased to the level of 47 per cent. Paarticulate matter are very tiny solid or liquid microscopic particles present in the air. These particles contains carbon monoxide, carbon dioxide and lead which are dissolved and present in the air. Which make air poisonous and it is extremely dangerous for human health.

Alarming study results of America
Environment Performance Index [EPFI] says that among 178 countries India is ranked 155 in pollution whereas China is ranked 118, Brazil 72 and South Africa is ranked 77. Experts say that the number of buses is much lower than the passengers. That is why private vehicles are increasingly moving. If the public transport system will not be strong in the coming days, the situation will become uncontrollable. The increasing number of private vehicles are increasing air pollution.

Government agencies has to improve public transports like: bus, auto – rickshaw and taxi or separate corridors should be the issue of concern. CSE Director Sunita Narain says that pollution standards are continually being ignored. Here are more than 70 million vehicles. There is a strong need to cease the increasing number of vehicles constantly. None efforts are being made to cease the air pollution that is coming from other states. These factors are making Delhi day by day polluted.