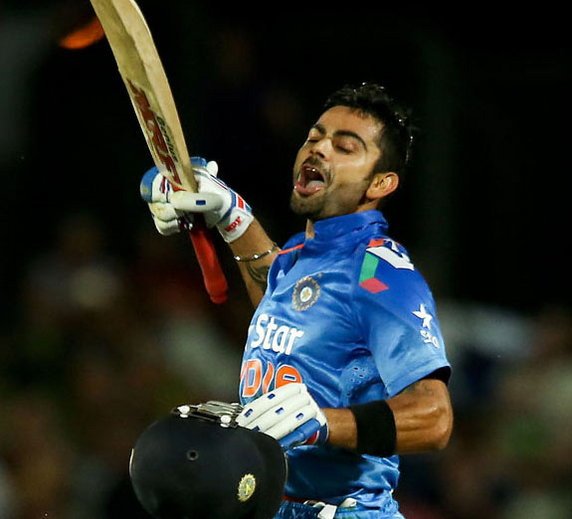 McLean Park hosts New Zealand in the first ODI against India won by 24 runs. Opting to pursue the goal of 293 runs in 48.4 overs India were dismissed for 268 runs. Virat Kohli put his century, of course, but they could not bring his team to win.

With the win, the Kiwi hosts a 1-0 lead in the five-match ODI series took. Unbeaten innings of 68 runs for 2 wickets Corey Anderson was elected player of the match.

The thing feared. Indian batsman pitches to New Zealand again failed to chase a big score. Makclenagn Mitchell met for the first time against New Zealand batsmen struggled for runs appeared. Mitchell spent a total of 68 runs, Rohit Sharma, Virat Kohli, captain Mahendra Singh Dhoni and Ravindra Jadeja dismissed such greats.
To gain a huge total of 293 runs, Dhoni brigade needed a good start, but could not do so. R 3 dismissed, then shortly after, Shikhar Dhawan 32 runs were back in the pavilion.
Ajinkya Rahane (7) and Suresh Raina (18) after failure of Virat Kohli (123) skipper Dhoni (40) innings together somehow took 4 wickets for 224 runs to reach the score of 129 runs, but Makclenagn 43 overs, Dhoni finished the war.
Ravindra Jadeja bowling then did the same, and then he was out at 0 – the effort completed.
ICC team rankings, India ranked below the 8 sitting Kiwi team performed like champions. The accurate bowling of the bowlers, fielders, while showing the agility runs withheld.
Pchasa Corey Anderson, who took 2 wickets. Tim Southee, Kane Williamson, Adam Milne and got 1-1 wickets.
Team India won by 293 runs challenge
New Zealand by 293 runs against India’s challenge. Opting to bat, losing the toss before the hosts scored 292 for the loss of 7 wickets. Corey Anderson unbeaten 68 runs. Mohammad Shami 4 wickets for India. Jadeja, Bhubaneswar and Ishant got 1-1 wickets

Previous 9 Selebs dead in 19 days, was the mysterious death of someone, be someone Suicide
Next But why not get the credit Katrina