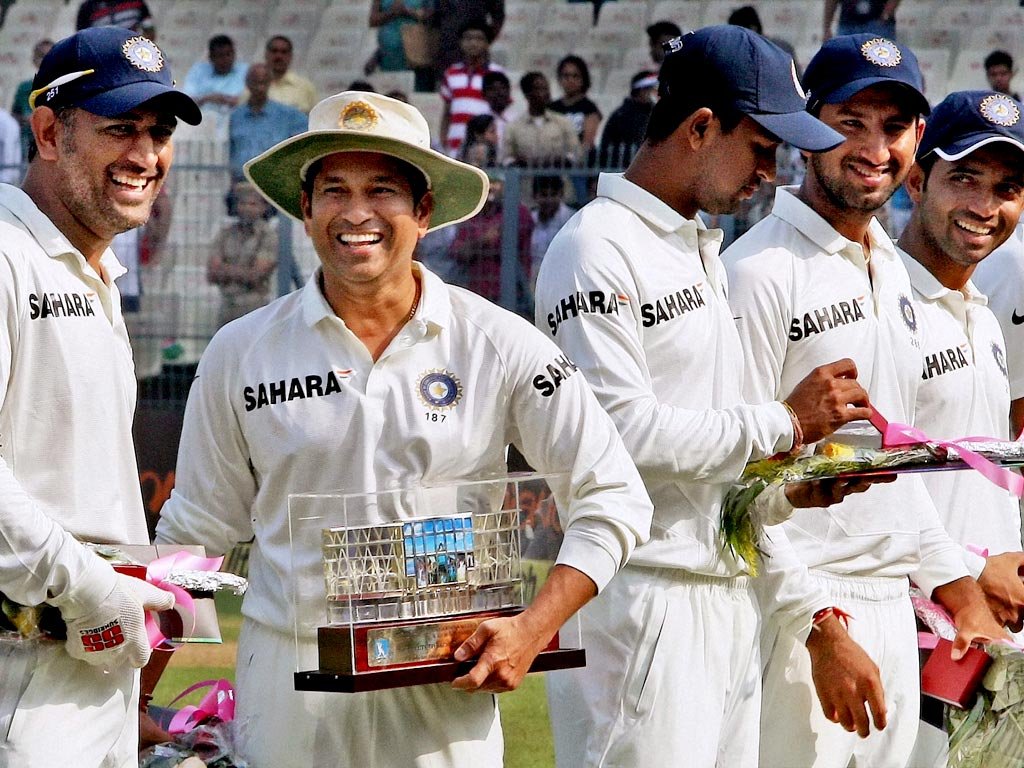 Mohammad Shami   ( 9/118 ) Bowling and Rohit  – Ashwin  superb century before the first Test match in Kolkata , India West Indies defeated by an innings and 51 runs . The third day of the match, India West Indies first innings after trailing by 219 runs in the second innings were all out on just 168 runs . With this two-Test series 1-0 , India has overtaken . The second match will be played in Mumbai from November 14 , which will be Sachin Tendulkar ‘s 200th and final Test .

By Sheldon bold Coterl Indies innings ended by Shami . Tino Best of the West Indies ninth wicket was taken by dismissing Pragyan Ojha . Rohit Sharma to make his debut match for the magnificent century was declared man of the match

Shami its highest wicket-taker in Test match debut became the second Indian bowler . Record the name of Narendra hirwani who took 16 wickets against West Indies in 1994 . There were four wickets in the first innings Shami . 5 wickets for 47 runs in the second inning by Shami and choked the return of the West Indies . Ashwin took three wickets for 46 runs in the second inning . Ashwin 5- wicket haul in the match by 124 runs performed outstandingly well . West Indies Gayle for 33 , 36 and Bravo 37 Powell runs out while looking Chanderpaul not out 31 runs .

India first innings after trailing by 219 runs in the second innings of West Indies bad start . Chris Gayle to score just 33 runs while scoring as many Bhubaneswar Kumar became a victim once again . Virat Kohli caught them out.

The Powell added 68 runs for the second wicket with Bravo . Powell to score 101 runs, 36 runs was lbw to Ashwin . Samuels with superb batting in the first innings before tea sometime in the second inning on no account opening bowler Mohammad Shami was lbw . Tea Time in the West Indies score was 3 wickets for 112 runs . Bravo individual score of 37 runs after tea on the fourth Indies jolted by Ashwin out . At that time the score was 120 runs . Shami said Ramdin out on 125 runs for the fifth jolted Indies .

Chanderpaul and the West Indies innings by adding 27 runs for the sixth wicket Sammy tried to get past West Indies by 152 runs losing three wickets lost the match third day . Indian team to score 152 runs two consecutive shocked by Mohammad Shami . He first bowled by Sammy at 8 runs scored zero on the next ball was bowled Shilingfrd . Shami on the next ball hat – trick against Chanderpaul out and had appealed to the Chanderpaul not out and then Haht of Shami – Present Prmol trick did not work during this period were run out on the other end .

Before Rohit – India Ashwin Century and record the third day day thanks to the partnership before lunch in the first innings , India’s entire team was dismissed for 453 runs . The West Indies first innings on 219 runs by India had gained .

Rohit Sharma Ashwin for India ‘s 124 -run innings and 177 runs . While most of Shilingfrd 6 wickets for the West Indies . West Indies had scored 234 in their first innings . Earlier this morning , Rohit and Ashwin India’s score of 354 runs for 6 wickets forward. Rohit – Ashwin seventh wicket partnership of 280 runs in the seventh wicket in Test cricket, India’s largest partnership in Test cricket . Ravichandran Ashwin in Test cricket today of its second century . A little later Rohit Sharma 150 runs . With 150 runs in his Test debut Rohit Sharma just another Indian. Earlier this year, Shikhar Dhawan scored 187 against Australia , who made ​​his debut Test best score by an Indian .

However, Rohit Sharma after scoring 436 runs in 177 balls Virasami Prmol a given lbw . Although there was some doubt on Rohit ‘s dismissal . Because it seemed that there was going to leave the ball outside off stump . But Elbeedblu given out by umpire Richard .

A little later the Shilingfrd Ashwin bowled the ball . Innings with the wickets of Ashwin in the fifth wicket Shilingfrd shock. BHUBANESWAR Kumar Shilingfrd on 451 runs ( 12 runs ) dismissing India jolted the ninth . India’s last wicket fell as Shami , Prmol on them by 453 runs out .