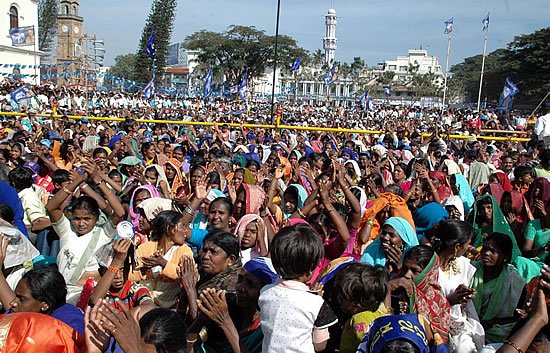 As election campaigning attains fever pitch, Bahujan Samaj Party (BSP) supremo Mayawati is going to hold eight rallies in four days, starting Thursday. The Delhi wing of BSP, which is trying to draw Muslim voters in the aftermath of the Muzaffarnagar communal riots, has decided to hold the first rally in Yamuna Vihar, northeast Delhi. The area has a significantly high Muslim population.
“We are all set for tomorrow’s (Thursday) rally. This time we are hopeful of having a good representation from Bahujan Samaj Party in the Delhi assembly. After Yamuna Vihar, BSP supremo Mayawati will address a rally in Ashok Vihar,’’ said poll in-charge M L Tomar.
The party hopes to capture the mind space of Muslim voters, who till now have been siding with Congress. “Muslims are fed up with Congress and want change. Bahujan Samaj Party is a good alternative as we had ensured the safety of Muslims in Uttar Pradesh when we were in power. Also, the Congress-led Delhi government has done little for the uplift of the Muslim community in the city. Mayawati will focus on these issues,’’ said Tomar.

BSP declared list of 58 candidates for Delhi Elections
Mayawati is supposed to address rallies in Tughlaqabad, Najafgarh, Narela, RK Puram, Trilokpuri as well as Dwarka in the next four days. In the 2008 assembly elections, Mayawati, then chief minister of Uttar Pradesh, had held three rallies, in Trilokpuri, Sultanpuri and Aligaon, in the city and got a tremendous response from the public, according to party leaders. The party is hopeful that the eight “mega” rallies by Mayawati this time will boost its performance in the Delhi assembly polls.
Apart from its traditional voters, the party is focusing on Jats and Muslims. “In last decade, BSP has become the third important player in Delhi politics. We want people to keep in mind the development work done by Bahujan Samaj Party in Uttar Pradesh while voting in the upcoming assembly election,’’ said ML Tomar, incharge of Delhi BSP.

“This time, we plan to cover all the parliamentary constituencies as our voter base has expanded in the last five years. Last time, we won two seats and this time we are hopeful of increasing our voteshare from 14% to 20-25%,’’ said Tomar.
Apart from the issue of inflation, full statehood to Delhi among others, the party is also going to stress on the law and order situation in Uttar Pradesh during its regime to garner public support.