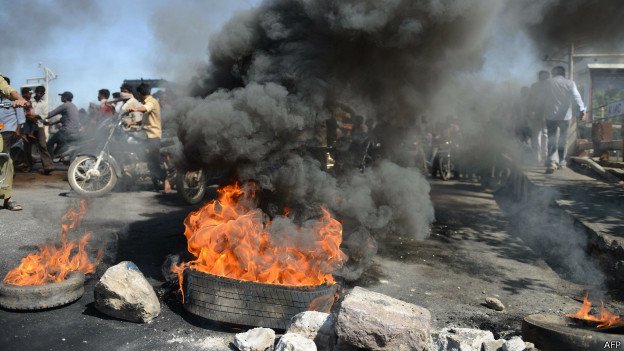 Due to protests over Telangana issue in Andhra Pradesh Simandhr six districts have been completely stalled power supply. Many district hospitals and power Visakhapatnam airport is very bad.

Private hospitals in these districts have no power, they are the power supply through generators.

According to Dhananjay’s senior correspondent in Hyderabad ETV,” King George Hospital in Visakhapatnam is completely black out, in addition to the hospital nearest three districts of Orissa are patient.”

Seven districts including Hyderabad are partially affected by power cuts. Andhra from a week off since the loss of millions has started.

The state government has called for talks to striking electrical workers.

While sitting on a hunger strike to protest Telangana Jagan Reddy’s blood pressure has fallen .

Vsimandhr including Rayalaseema coastal Andhra mean power over 40 thousand employees are on strike . Has had a huge effect on the output .

Power crisis has had on the industry and train services .

According to Dhananjay  power of workers unions strike paralyzed the state has nearly 4,600 MW .

These are the trains going towards Kolkata and Tamil Nadu .

Visakhapatnam shipyard crisis has affected the production of electricity . The steel plant is also being affected .

Traffic was paralyzed in several districts of the state . Anantnagr , Vijayawada are the worst affected .

Houses of Congress MPs and MLAs in the state ,  State Congress chief Botsa Satyanarayana ‘s house in Vizianagaram and local offices were targeted .

Their homes, offices and central government offices in more than 40 companies have been deployed for security .

Paramilitary troops are also being floated .

On Monday, however, is not aware of any violence and large display . But in the last two days of violence in Andhra Pradesh and has performed in many cities . Saturday curfew continued in Vizianagaram .

The cabinet in protest against the decision of Telangana flagged Ansnh are sitting on the Saturday and indefinite .

His blood pressure has fallen . All of the leaders are going to meet him today .

The TDP president Chandrababu Naidu in New Delhi on Tuesday announced to sit on a hunger strike .

They allege that the separation of state and Congress is trying to take political advantage .