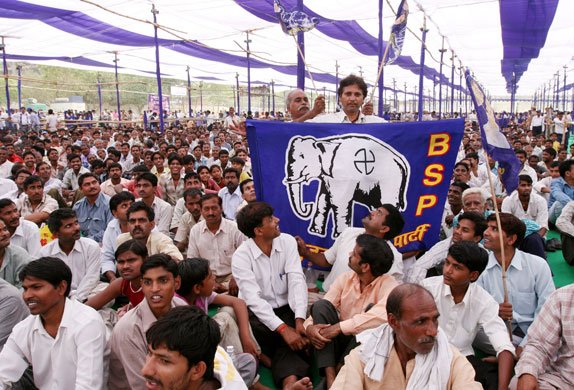 BSP Supremo in Delhi, flaunts party’s past glory in UP, BSP Rally in Delhi

The BSP, which was the third largest party in the 2008 polls and is looking to make an major impact this time as well, is holding a number of rallies in the Capital. Mayawati will take part in eight rallies, two of which she addressed on Thursday.

During her 40-minute speech, Mayawati highlighted the lack of development in Uttar Pradesh in the Samajwadi Party’s rule and how both Congress and the Bharatiya Janata Party (BJP) had failed to do anything for the poor in Delhi.

“During the SP’s regime, there were riots in Muzaffarnagar and Shamli. But we will provide security to every community. If we are voted to power in Delhi, our priority would be taking care of the weaker sections,” she said during the rally in northeast Delhi’s Yamuna Vihar.

Mayawati said Muslims should not be labelled as terrorists and if her party came to power, police brutality on innocent people would be stopped. “Be it in Delhi or any other state, the police must not round up innocent civilians after a terror attack and torture/harass them. The whole community should not be punished for the guilt of one guy,” she added.

BSP, the third largest party in Delhi in the last Assembly election with a 14.05% vote share, is targeting the migrant vote. About 43% of the migrants in Delhi are from UP and the BSP has asked its candidates and workers to spread word about the “good governance” of Mayawati among them.

Apart from Mayawati, other BSP leaders too highlighted the Muzaffarnagar riots. “We don’t need to tell people, they are aware of everything. In less than two years of Samajwadi Party coming to power, there have been 114 riots, including the one of Muzaffarnagar. The BSP has been in power in UP for four times and not a single incident of rioting, either small or big, has been reported during our tenure. During BSP’s rule, criminals fear the law and are arrested without bias,” said Ram Achal Rajbhar, president of Delhi BSP.

Mayawati addressed another rally in north Delhi’s Ashok Vihar, where she talked about regularising unauthorised colonies and ensuring the safety of women in Delhi.

In the last Assembly polls, the BSP had won two seats and stood second on five seats. The party also finished third on 55 seats.