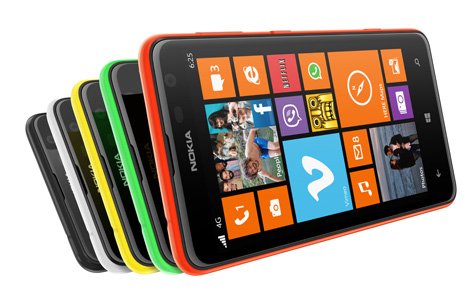 Nokia Lumia 625 launch in all their phones from Nokia has a big screen . In his segment on the phone is mostly mirrored fronts .

Design and Hardware : Lumia 625 Lumia 620 looks like in terms of design , although it is slightly larger and thinner . As soon as the Lumia 620 with curved edges and a detachable cover, but thin it makes it more attractive . Lumia 625 ‘s 4.7 -inch screen certainly fittingly large. It feels good to see the design and the build quality seems to be strong . It is a bit heavy with the weight of 159 grams .

Lumia 625 looks great on the front panel of the screen . Nokia India to launch the phone was put on the fact that this phone is for those who prefer to watch videos on the large screen phones .

The most important feature of the display should be the Lumia 625 , but it did not affect us much . IPS display with 800×480 pixels Rejolusn market is no different from the plethora  android smartphones . Nokia did not use the Kliyrblack display technology , which could make it a little different . The display contrast levels due to lack of technology is less . It seems that the company has done to reduce its price . But the technology used in low-cost Lumia 720 , and we all tests conducted in this price range , they are one of the best screens .

Viewing Angels and other things associated with the sun appearing as the display is good and we had no problems in every day use . Super Sensitive Touch screen technology has been used , can I use it while wearing the gloves . Although this feature is also a low -cost Lumia 520 .

Software : The software Lumia 625 is almost the same that we have seen in phones Nokia Lumia earlier , except that the AMBER Update – Pre- loaded arrives . This update FM radio , glass screen and camera features such as See Improvement .

Lumia 625 running on Windows Phone 8 operating system has some difficulty . Maltitasking in the right ways , notification center and it does not run multiple apps simultaneously , which in our opinion is an essential requirement for completing Akspiriyns smartphone . It may be that this problem may be turned away from the update . Apps fewer problems will also heal with time .

Camera : The camera in Nokia’s smartphones has always been a priority . Lumia 625 camera but we were a little disappointed . 5 Megapiksls phone with LED flash on the back of the camera . Photos taken it looks a little noise and vibrant colors do not appear correctly . Photos of some more detail on the edges and do not reflect a Softones . In the case of camera Lumia 625 looks a little weak .

Performance: The Nokia Lumia 625 1.2 Gigahrtj dual – core processor and 512 MB ​​RAM . Test the phone close to the Antutu benchmark score of 9000 , which does not affect that much , but it shows the phone’s performance in terms of work fittingly is . Some people might feel that 512 MB ​​RAM is too low , especially in equivalent 1 GB RAM , given  android phones . But it should be remembered that in Resource Management and Windows Phone 8 is better than Windows Phone platform  android Apps smooth functioning of the low demand for the 1 GB RAM .

The 2,000 mAh battery is good. It is in everyday use up to about 14 hours , 4-5 hours in which to listen to music , watch video 1 hour and half – half an hour , including web browsing and gaming . It has 2 to 8 hours in a day on live data to be included . After all batteries are running more than one day .

Who compete in India Nokia Lumia 625 Samsung Galaxy Grand and Micromax Canvas Combat 4 can be considered .

Samsung Galaxy Grand is a 5 -inch screen , which is slightly larger than the Lumia 625 , although both have the same screen Rejolusn . Grand galaxy colors look better on display than the Lumia 625 and the sun is reflected on it better . Galaxy ‘s grand design is too old , at the time of the launch of the Galaxy S 3 is running . The Grand also works well in terms of the benchmark and the camera phone from Nokia has proved good .

In terms of highest screen quality with the vibrant colors  the Micromax Canvas 4 is definitely better than Lumia 625 . Excellent build quality at the edges of the canvas 4 looks better than  aluminium frame . The screen is more like Grand galaxy . But the Lumia 625 is ahead in terms of touch .

The Lumia 720 Lumia 625 also has to compete . Lumia 720 better screen contrast , great design and excellent build quality and camera performance , making the user experience  is great . If the screen size is not your priority , you can also see the Lumia 720 .

The result : the Lumia 625 is not weak in any case , but in any case there is no separate device . The Lumia 720 is a little further in many cases . Despite the slightly weaker performance of the camera you are thinking of buying it , as it contains everything you need – hardware , software and  experience – get