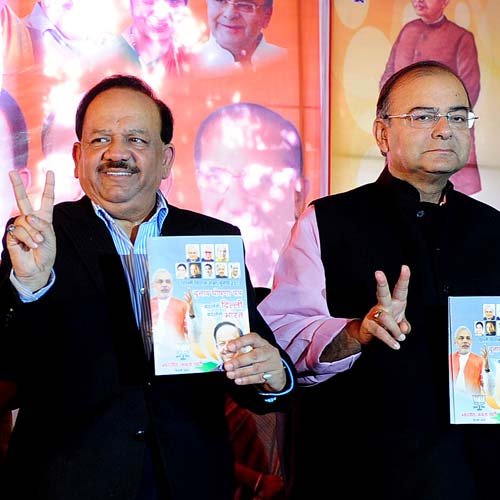 Delhi BJP’s capital with its agenda on Tuesday released its election manifesto. The party in its manifesto to the people of the capital, better education, medical facilities and transport facilities have promised. Pradesh BJP Leader of Opposition in Lok Sabha Sushma Swaraj office, Leader of Opposition in Rajya Sabha Arun Jaitley, Nitin Gadkari party in charge of Delhi, Dr CM candidate of the party. Harsh Vardhan and Vijay Goel issued the declaration.

Before releasing the party manifesto had said on November 22, but instead the party manifesto of the party strategists Vision Document ‘for ten days – ten intentions’ to issue advice The. The date of the declaration was deferred. Declaration deliver rations to the poor and has promised to provide basic amenities in unauthorized colonies.