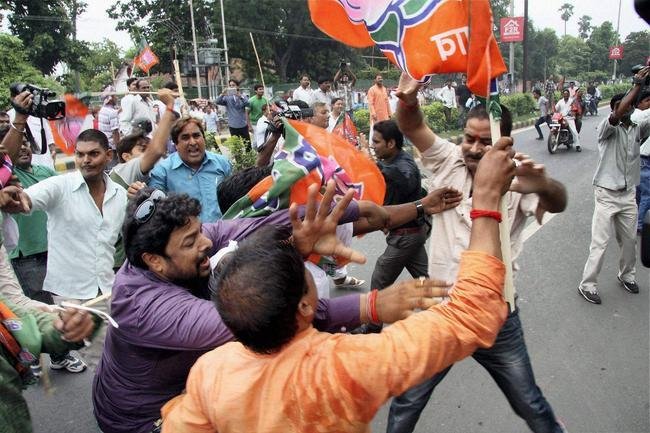 The BJP Central Election Committee on Thursday, declared the first list comprising of 147 candidates for the Madhya Pradesh Assembly elections.
The three MPs in the fray are – Yashodhara Raje Scindia, who will contest from her family’s stronghold Shivpuri, Bhupendra Singh (Khurai) and KD Deshmukh (Katangi).
Former MP and octogenarian Arif Beg will contest the elections from Bhopal North while another former MP Jaibhan Singh Pavaia will fight the polls from Gwalior seat.
Two ministers – Devi Singh Sayyam (Dhindori-ST) and Ram Dayal Ahirwal (Chandla-SC) have been denied tickets. Jai Singh Maravi and R D Prajapati will contest from these seats respectively.
Rahul Singh, Uma Bharti’s nephew, has been fielded from Khargapur constituency.
Chief Minister Shivraj Singh Chouhan will contest from Budhni, former CM and minister Babulal Gaur from Govindpura and minister Kailash Vijayvargiya from Ambedkarnagar Mhow.
Indore MP Sumitra Mahajan’s son Mandaur has been denied a ticket. He was expected to contest from Rau but the ticket has been given to Jeetu Jerati, a sitting MLA.
BJP has pitted Radheyshyam Dhakar against Congress General Secretary Digvijay Singh’s son Jaivardhan Singh in the Raghogarh seat.
In the list of 147 candidates, 18 are women, 19 from the Scheduled Caste and 30 from the Scheduled Tribe. The party has fielded one ST candidate from a general seat.
BJP also declared candidates for 11 seats for the Mizoram Assembly elections. It will contest 25 seats in all in the state and support candidates on two other seats.
Polling in both Madhya Pradesh and Mizoram will be held on November 25. The results for MP will be declared on December 8 and for Mizoram on December 9.
(Agencies)  [Jagran]