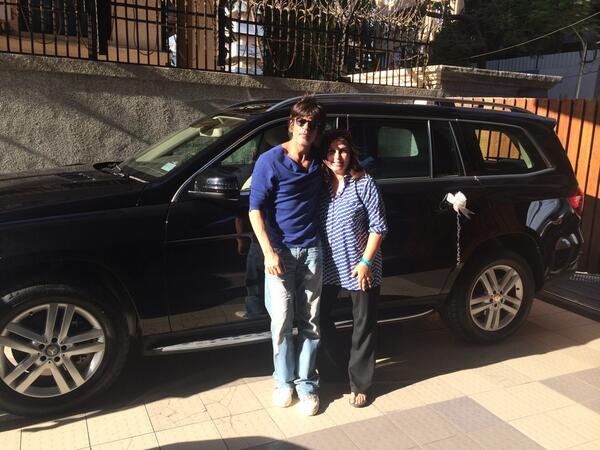 Whenever Farah Khan make a film with ShahRukh Khan it is not only guaranteed to be a blockbuster, but she knows that ShahRukh Khan will gift her a car also. Shahrukh Khan used to gift Farah a car after the film, but this time King Khan did not wait to finish the shooting. On Friday ShahRukh Khan surprised her by gifting her a black SUV Merck.

Farah Khan and Shahrukh are working on a film ‘Happy New Year’ which is going to release this Diwali. It has been told that Farah’s car was not in good condition and was facing some problem so Farah was using Volkswagen car of Shahrukh from the past few months.
Shahrukh has gifted two cars earlier to Farah Khan for her two films ‘Main Hoon Na’ and ‘Om Shanti Om’. But both times he gifted the cars after completing the shooting. So Farah Khan did not expect that this time he will be so quick to gift her a car.

According to Farah, ShahRukh called me in the office and said I want to show you something. Shahrukh usually gives me a gift after the shooting. That’s why I was thinking that till June I will not get any gift because the shooting will continue till June last. ” Farah Khan said from his office on Linking Road he had taken her to the drive by this new car.