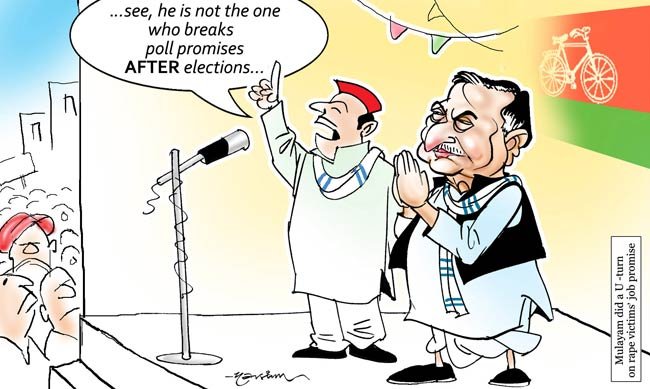 After criticism Mulayam step back from his rape statement

Samajwadi Party supremo Mulayam Singh Yadav on Friday is back on his last statement. He told in a rally in Moradabad that it is wrong to give death sentence to the rape convicts. He said that if SP comes to the power, then such legislation will be reviewed. He also said that boys tended to make such mistakes, it does not mean that the capital punishment should be provided to them.

He get steady-round criticism after making this statement so today in ‘Babrala’ he backtrack from his statement. Yadav said that his statement was presented incorrectly. Wrong intent is being made what he meant to say. He said that some people wrongly implicated in the case of rape. It also hanged innocent people which is not right. He said that we want that only those who are really the guilty, should be punished. We’re not talking about saving the culprits. The guilty should be punished severely.

But more than half of the countries have banned hanging then this should be the restricted in India also. He also implicated that innocent certainly not convicted. Yadav said that as far as the safety of women is concerned, Samajwadi Party’s government is giving the most protective environment for the women.

SP chief Mulayam Singh Yadav said that the third Front will make government at the Centre this time. SP will play important role with the third front and will be the largest party in the morcha. Mulayam was addressing an election rally in the Nadha near Sahaswan town.

He attributed the current central government minister as most weak and useless. He said that China has occupied our land, but the government is not doing anything.