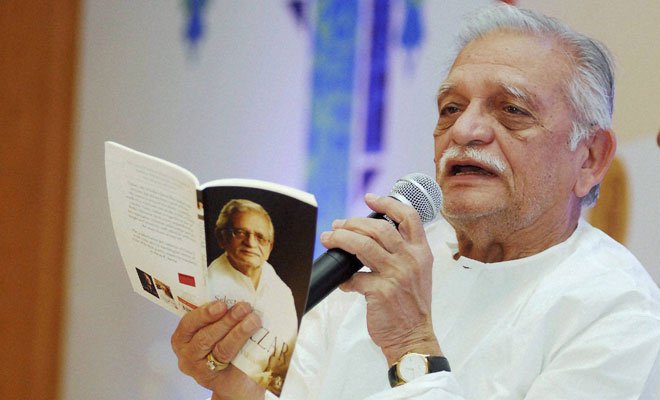 “Tujse naaraj nahi zindagi!” And “tere bina zindgi se koi shikva to nahi” songs like this are composed by Gulzar and famous film composer and director Gulzar has been awarded the prestigious Dada Saheb Phalke Award. In India, it is the highest honour given to film personalities. Previously, famous actor Jitendra’s name was being taken for this award.

Receiving this honor 79-year-old Gulzar, is the 45th man. According to a statement issued by the Ministry of Information and Broadcasting, distinguished seven members of the jury unanimously recommended this award for Gulzar.

In literature in 2002 Sahitya Akademi Award was given to him for his contributions. In 2004, he got the Padma Bhushan, in 2009 he got ‘Best Original Song Oscar’ for the song ‘jai ho’ of the movie Slumdog Millionaire and in 2010 he got Grammy award. He has been awarded many times the National Film Awards and he has also many Film fare awards to his name.

Was born in Pakistan:

He was born in 1934 in pre-partition Punjab province of Pakistan, his actual name is ‘Sampoorn Singh Kalra’. His family came to Amritsar after the tragedy of division but he moved to Mumbai. He started working as a mechanic in a garage. In his spare time he wrote poems. His three poetry collections “chand pukhraaj ka” , “raat pashmeene ki ” , “pandreh paanch pichhatter” and two short stories “Raavi Paar” and “dhooaan” have been published. Gulzar’s film debut was in 1956 with Bimal Roy’s Bandini, for which he wrote the lyrics.

– Lata Mangeshkar wrote on Twitter, Namestey! Director, writer and lyricist Gulzar saab chosen for the prestigious Dada Saheb Phalke Award, best wishes wholeheartedly. In 1977 the song ‘naam gum jaega’ by him in the film ‘kinara’ is my favorite song.

– Singer Rekha Bharadwaj greeted Gulzar with the filmmaker and her husband Vishal Bhardwaj.

It is a great honour for me. I’m glad that this time I will not have a problem with the black coat. When the call comes, I will come to Delhi to receive this honour.

The 2009 movie “Slumdog Millionaire song” Jai Ho “won the Oscar award. But he did not receive the award just because he was not ready to wear black suit which was the formal dress code for the event.