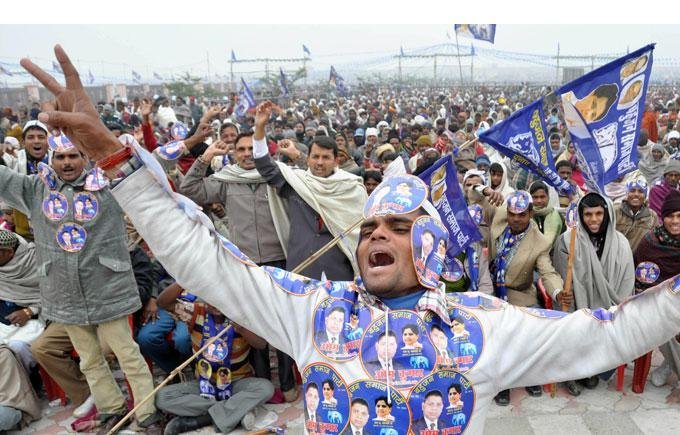 Bahujan Samaj Party ( BSP) chief Mayawati has said that his party in the next Lok Sabha elections will not align with either party in any way . Besides, Mayawati said the party alleging manipulation in the other – engaged in cutting Advani , Rajnath trio of Modi and his party would benefit greatly election .

Our party will contest with all alone . ” She said that such rumors are being internally or externally by our Congress or BJP may be compromised . These things only airport , which is thought – are being promoted under the conspiracy . Maya said that our aim is to mislead people and damage to the BSP .

She said, “Staying at number one party elections in Uttar Pradesh, will play a key role in the mission of social change. BJP us to achieve our goals Advani, Modi and Rajnath’s trio also helps that the inside – one is engaged in cutting each other.

Mayawati said the BSP before the Lok Sabha elections in Delhi, Rajasthan, Madhya Pradesh and Rajasthan, is contesting on its own. In this election, the party is trying to emerge as a force in order to create the right policy for the poor and the oppressed pressure on governments. The BSP chief said that the motive to succeed in the four states he will visit soon.

She said the law – law and governance at the front of the Uttar Pradesh government failed to fully meet your interests with the collusion of the BJP is making riots . People need to be cautious . Today I again recommend President’s rule in Uttar Pradesh governor of the appeal . ”

She said , ” BJP ticket-seekers to assemble most of the people today in their rallies to overcome the country’s problems – Big announcements are . Then why did not they work when they were in power at the center for six years . ” He wilderness in Uttar Pradesh due to looting, robbery , murder , rape and consistent increase in incidents of communal violence has plagued much of the general public . Until then, it will not be long in the land of peace , development, trade and industry, the business will not thrive . In this case, the backward state of Uttar Pradesh will become full .

She said that the development work to a complete standstill . Some people distributing laptops and scholarship allowance or unemployment welfare of society is not possible . The knotty problem of youth unemployment , which is currently rampant in the government are going to take . BSP to hide its failings, is blaming the government of the Socialist Party , but now it is no use .