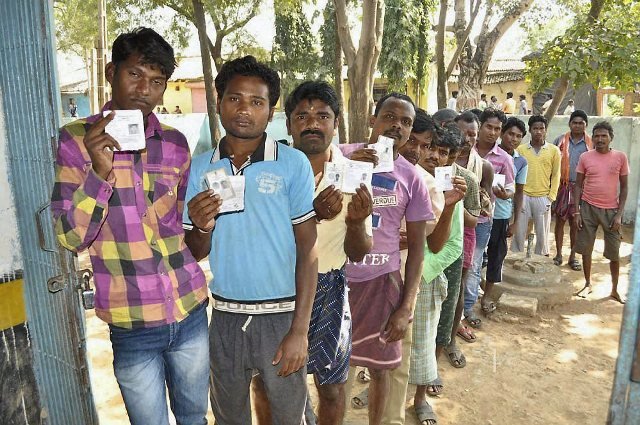 Polling has started for the second phase of elections for six seats of 4 north-eastern states. There are nine phases for the Lok Sabha elections in the country. The voting for Mizoram’s one and only Lok Sabha seat has been postponed to April 11. This step has been taken due to state wide closed (band) by Bru camps in Tripura against the initiative taken of postal voting for Tripura camp.

In the second phase of voting Nagaland and Manipur one – one seat and two seats of each of Meghalaya and Arunachal Pradesh – are going to vote for. 49 out of 69 assembly seats of Arunachal Pradesh are also going to vote for. In Nagaland only three candidates are in fray for the only Lok Sabha seat. The Chief Minister Neiphiu Rio (NPF), KV Pusa of Congress, Akeyu Acumi of Socialist Party (India) are in contest for the single seat of Nagaland. 11,79,882 voters will use their voting right for this single seat.

The voting also continues for two outer seats of Manipur. There are 10 candidates are in the fray for these seats. BJP, Congress, Trinmool Congress, the Naga People’s Front, NCP, JD-U and the AAP candidates are included. There are also three independent candidates who are contesting. Prominent candidates who contest these seats are Thangso Beti Congress MP, Kamei Gangmumei Kamei of BJP, Kim Gante of Trinamool Congress , Soso Lorho of Naga People’s Front, L Gangte of JD-U and MK Jou of AAP.

There are in total 911 699 voters in which 463 068 are women. Here 511 polling booths have been set for the voting procedure. In the western and eastern Arunachal Pradesh BJP parliamentary seats, NCP, PPA and independent candidates are contesting in a triangled way.

In the Arunachal Pradesh western region seat eight candidates are in the electoral battle in which MP Takam is against the former MP and BJP candidate Sanjay Riji ju. Eastern Arunachal Pradesh, Union Minister of State for Minority Affairs Ninang Aring contest against BJP’s Tapir Gao and Wangman Lovangcha of People’s Party of Arunachal Congress has been winning for these two seats since 1975. However, in 2004, the BJP won for the first time for this seat. Meghalaya has two Lok Sabha seats for which polling will decide the fate of 10 candidates. The NPP chief PA Sangma, MP Vincent Paul, former student leader Paul Lyngdoh and church leader Basaivmoit M PB are in the que for that. For the Shillong seat, the ruling Congress party and independent candidates and United Democratic are on angled counter to combat. Sangma has won 8 times out of 10 for this seat.

Election Commission today postponed the voting for only one seat in Mizoram from 9 April to 11 April. This step has been taken due to statewide closed (band) by Bru camps in Tripura against the initiative taken of postal voting for Tripura camp. Meanwhile, Joint NGO Coordination put an end to the band saying that Election Commission and the state government have agreed to their demands.

Previous Voting continues for the first phase, the voting rows began –
Next IPL Season 7: eyes on these giants